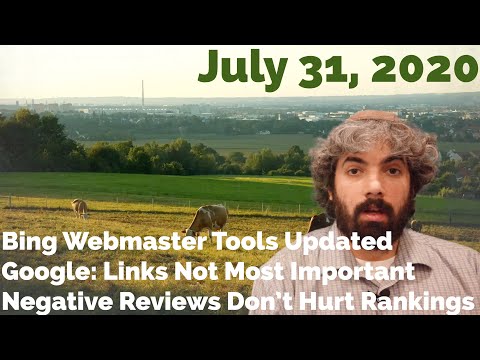 This week I covered a bunch of topics including an interesting topic on do negative reviews on the web hurt your chances or ranking well in Google. Google’s John Mueller also told us to forget everything we’ve read about link juice. Bing launched its new Bing Webmaster Tools and added a new URL Inspection tool and a new Robots.txt tester tool. Bing also did some outreach to those who installed the new Bing WordPress URL submission plugin and had issues. Google Search Console added support for image license structured data and the Rich Results test tool support that markup also. Google said they plan on expanding the Rich Results test tool after the complaints from the SEO community. Google’s testing tools also support showing Web Story. Google Home smart displays, the Google Home Hub now shows how-to schema as tutorials. Google is sending notifications to those with job schema to add telecommute markup for remote jobs. Google is testing a new form of local Q&A boxes. Google local pack is also testing product carousels. Google My Business added a new attribute for black owned businesses. Google updated several of its Google Ads policies. Google Ads is testing sub-headlines that are hyperlinks. Google Top Stories is testing “for context” links below the main story. Google is testing thick gray borders in search. And for some reason Google had a “wear a mask and save lives” Doodle the other day but they removed it. Oh and if you want to help sponsor those vlogs, go to patreon.com/barryschwartz. That was the search news this week at the Search Engine Roundtable.