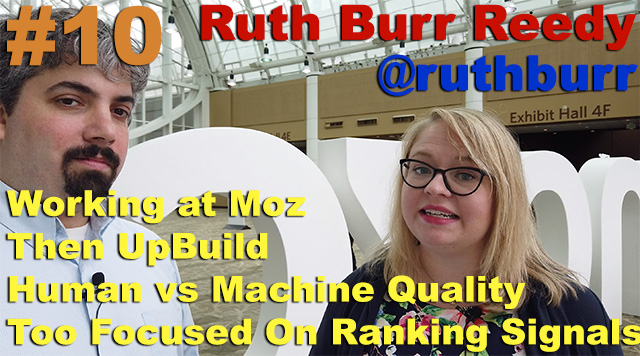 In episode #10 of the vlog series at the Search Engine Roundtable I interviewed Ruth Burr Reedy (@ruthburr), the Vice President of Strategy at UpBuild. She has a BA in Theatre and decided she needed to get into something more stable and then got a temp job and became a writer in 2006 and from there learned a ton about SEO. From there she became the head of SEO at Moz and lead the SEOmoz.org to Moz.com transition. She then moved to Oklahoma and left Moz, and works now at UpBuild – a company that is awesome to work at. She discussed some of the issues around how SEO agencies hire SEOs and sometimes end up mismanage those young hires. Ruth gave advice for new SEOs and what new SEOs should look for when joining a new company.

Ruth then explained the concept around human versus machine readable quality signals to me, that was her talk at Mozcon. We then talked about Google algorithm updates and if they are useful to track. She gave advice around how to audit your site if it was negatively impacted by an algorithm update. We then began talking about the problem of getting too granular with algorithmic inputs, diving too deep into the Google Search Quality Raters Guidelines and EAT documents. Ruth doesn’t want us to focus on specific ranking factor inputs, it is not that important, she explained.

Here is the interview: 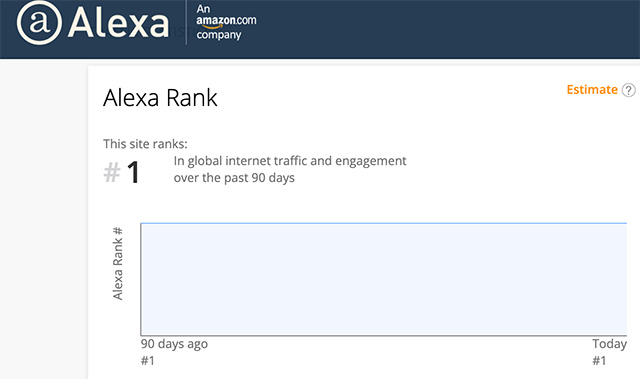 This is probably super obvious to most of you but this may be the first time I’ve heard Google comment about this. Amazon has this Alexa rank feature, they had it since like 1996, a super long time. Google’s John Mueller was asked if Google uses it for ranking sites and he obviously said no.

This is at Alexa.com, not to be confused with Amazon Alexa digital assistants, but owned by the same company.

Here are the tweets:

Google’s John Mueller said in that video hangout at the 39:51 mark that Google does try to recognize “additional details about information about the author, information about the reviewers, about the website overall, through through a number of ways.” This question was directly related to how Google understands content from medical and health sites.

If it’s just like hidden away in structured data then that’s not very useful for users because users tend not to use view source when looking at a page to determine whether or not they should trust it. So I would try to find an approach that works well primarily for users and focus on that.

Google’s John Mueller said in a video hangout this morning at the 1 hour, 5 minute mark, that when you link using images, make sure those images at least have some alt text on them. He said this would “to kind of give us the anchor text” for that link.

The question was “Image links versus regular links. Because we, I want us to link to the other websites that we have but showing the logo so it’s more user friendly and that people can see it and not only have a text link to that domain name. Would it still be okay to have it the link in the image?”

John Mueller responded “Sure. What I think is is useful there is either that you have the text link as well or at least that you use the alt attribute for the image to kind of give us the anchor text that you want associated with that link.”

Google has been telling webmasters to put alt text on images for as long as I can remember but I don’t think I ever hear Google say it can act as anchor text, like your’d have for normal hyperlinks. 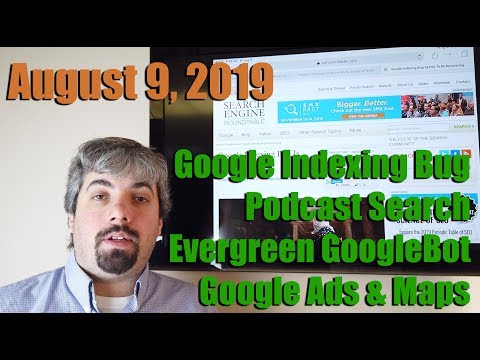 This week I mentioned the monthly Google webmaster report I posted. Google also had another indexing bug where it was not able to index new content for a 24 hour period, it does seem to be resolved now. Google updated its algorithm to show less pornography for some queries. Google added podcast search features to Google search. Google dropped the magnifying glass for the words search in its search bar. Google said it doesn’t show you Google Assistant responses in Google Search Console reporting. Google Search Console is now sending out monthly performance reports. Google’s tools now support the evergreen GoogleBot, but the evergreen GoogleBot is now still on Chrome 75 and not on Chrome 76 yet. Google says they do not index parts of a page independently. Google said word count is not a ranking factor. Google also said when using images for links, make sure to add alt text to those images. Google launched that image search preview sticky feature. Google also launched Google’s question hub which answers so many questions I had over the past two years. Google wants to know what you want them to put on the Google Search developer portal. Google said 65% of all searches are now mobile, really? Google Ads is telling agency clients directly no to specific requests, which is super bad. Google Ads launched a visual map for account structures. Google Maps added the new AR feature, tons of travel tools and features as well. Google My Business launched messaging insights and other features.. Google Local pack is testing more carousel features. Google My Business has a missing store code bug. Take Rand Fishkin’s search ranking survey. Also did you miss the vlogs with Paul Shapiro and Mary Bowling? That was this past week in search at the Search Engine Roundtable.

We don’t index parts of a page independently, we index the pages as a whole, and try to understand the context of the content there. Scrolling to a part of a page when we know that’s where the snippet was from makes a lot of sense regardless of indexing.

This came up when Glenn pointed out a section from John Mueller in a Google hangout where John said it is super rare for Google to index content after the hash in the URL uniquely. John said Google might index urls with a hash if it knows it leads to unique content but it is super rare.

Here is what John said:

Does Google ignore the URL parameters that come after hash. In other words – Google is slash category, hash some attribute the same?

Yes. In general we ignore everything after hash.

There two exceptions, one is the hash bang kind of the hash and then the exclamation mark. Which is what was used in the old AJAX crawling scheme, which we kind of separate out individually and treat as unique URLs. And the other exception is for a very very tiny number of sites we’ve recognized that URLs with the hash lead to unique content, so it’s not just going up and down within the page but actually leading to unique content, and there we do sometimes index those URLs with the hash as well.

But that’s extremely rare and that’s not something that I would rely on. So if you’re using the hash to change the content of your page, I would assume that we will crawl and index the URL without the hash for the most part. If you’re using the hash to jump up and down within your pages content, then that’s perfectly fine. We we tend to ignore everything after the hash. So things like links to the site and the indexing, all of that will be based on the non hash URL. And if there are any links to the hashed URL then we will fold up into the non hash URL. 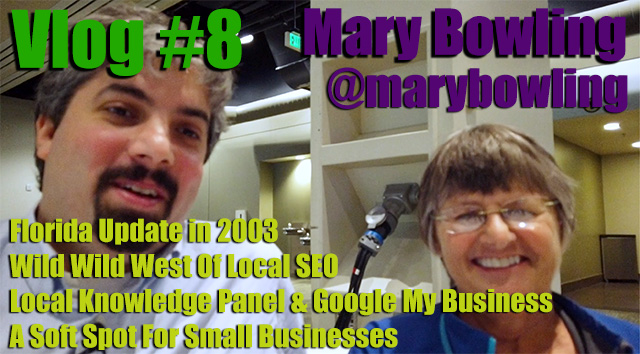 In episode #8 of the vlog series at the Search Engine Roundtable I interviewed Mary Bowling (@marybowling) of Ignitor Digital Marketing. Mary and I and I started off talking about her work, her company and also her conference series named LocalU. We then talked about her entry into the SEO field was around the Florida update days in 2003. Comparing the early days to maybe the days after the Panda release with local search. Specifically how the updates have improved both organic search and local search. We talked about proxies and the knowledge graph and how they helped mature local SEO. The wild west of SEO is known as the local SEO space, so we chatted a bit about that.

We then talked about her work in terms of sharing with the community, both online and at conference. Mary said she has a soft spot for small businesses and wants to help small businesses. Mary discussed how important it is for you to build your local brand and reputation, more so than ever now. Looking at the topical layers with local knowledge panels and how that plays into building your authority with Google.

Services and products tab in Google My Business is under utilized and local SEOs and local businesses should pay attention to it. Mary suggests you feed as much data to Google through Google My Business. With local, it is fine to give Google that data because your want that phone call, you want that new customer.

This should be the last out of focus vlog – sorry about that, I finally figured out how to use the camera after this one.

Greg Sterling was at the Engage conference last week and tweeted that a Google representative said that 65% of all searches are mobile. He didn’t say which Googler said this, it doesn’t seem to have been confirmed to have been said and I have not seen a Googler say this before.

In 2015, over 50% of all searches were done on mobile according to Google. But since then, Google has not shared an update to this metric. 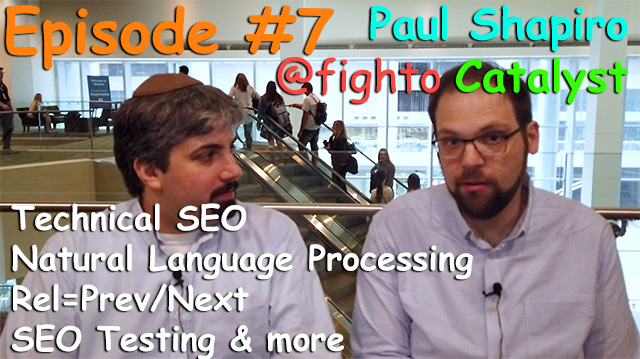 In episode #7 of the vlog series at the Search Engine Roundtable I interviewed Paul Shapiro (@fighto) Senior Partner, Head of SEO at Catalyst. In this interview we talked about Paul’s history in the SEO industry, starting out in NYC in 2012, then moving to Boston and just recently moving back to the NYC area. We then dived into how he approaches a new client’s technical SEO plan, including site command, crawling the site, looking at the data and then doing a deep dive into issues. We discussed his own tools at SearchWilderness.com.

Rel=next/prev came up and that was a fun talk, until we got into doing technical SEO beyond the basics of crawling and indexing issues. We touched on natural language processing, data science, SEO testing, speed and much more.

The camera work will get better, this was my first interview at Mozcon, it took a few tries to get the focus right. Stay tuned.