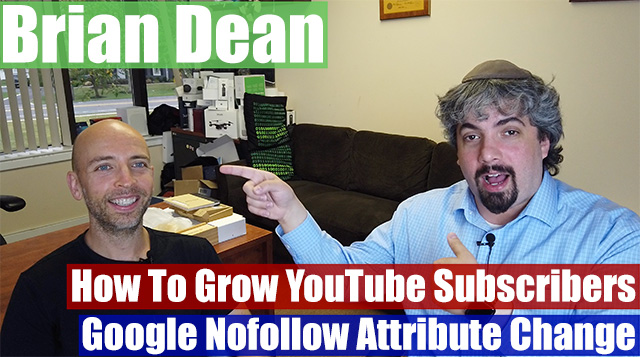 Brian Dean came all the way to my office in New York to sit down and talk about search, YouTube and more. If you don’t know, Brian’s YouTube channel has over 250,000 subscribers.

In his early days of SEO, he owned 198 domains and when Google released the Panda update, they pretty much all got wiped out in a single day. In any event, he built some white hat sites that did well and now spends all his time selling SEO courses on his web site.

Brian’s simple advice on how to grow subscribers on YouTube is to simple put up videos where those who watch the videos want to subscribe. He said if you can make videos where people say, “this is so good, I cannot miss the next one.” We also talked about giveaways but he isn’t a fan of giveaways, which I learned the hard way. He said it is more about quality and not gimmicks and it is not even about quantity. He said you need a couple videos that kill it and those videos that kill it, those are the ones that drive subscribers.

When it comes to YouTube videos, he said you must have an amazing introduction to your video. You need to get the attention of your viewer right away and get them engaged right away so they watch the whole video through. He gave some examples of how it works.

We then got into the nofollow link attribute, and how Google has changed it to be a hint for its purposes, as opposed to a directive. He said this shows that Google still values links are an important ranking signal. He always felt nofollow was a hint, a strong hint. The tool providers have adopted tracking the new rules, i.e. rel sponsored and related ugc. Brian also thinks this might lead to more link spam but we will see.